The harvested biomass is lignocellulose by nature, and therefore its energetic use is currently aimed at thermal applications (solid bio-fuels), Catalytic Depolymerization conversion method (liquid biofuels) such as Synthetic biodiesel and biogas (anaerobic fermentation), be it for heating, transport or electricity generation. The handling of the crop (particularly the dose of fertilization and the means of carrying out the harvest) and the level of development of the plants (ratio of cane to leaves) influence the composition of the biomass harvested and therefore, the calorific power. In relation to the standard solid bio-fuel (wood), the quality of the Arundo biomass is slightly inferior, but always comparable to other high-quality perennial herbaceous biomasses or sugarcane “bagasse”.

A. Donax plantation is established to last for up to 15 years. Therefore it is important that the land is prepared accordingly so that productivity is sustained and that management practices, such as harvesting, are facilitated.

All unwanted shrubs and weeds should be removed. If required an appropriate herbicide should be applied depending on the weed species present. Any land preparation operations will depend on the actual state of the field. Normally de-rocking, ploughing, harrowing and furrowing will be required. 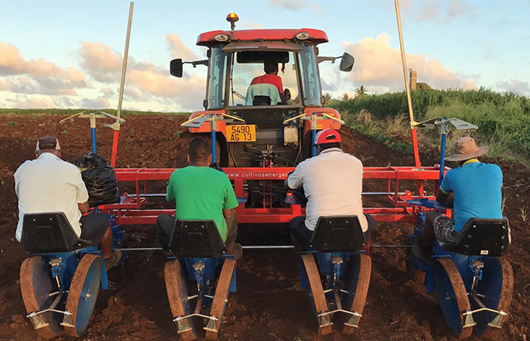 Arundo Donax does not produce viable seeds, therefore, the plant propagation is done using plantlets. The recommended effective method of establishing Arundo Donax plantations in the fields is to use plantlets, approximately 10,000 plantlets will be needed to plant one hectare of land area or alternatively 2 tons of cuttings.

The plantlets should be placed end-to end in a single row in the furrows. The fertilisers and compost are then applied in the furrows and then covered with a 5 – 10 cm layer of soil. Irrigation must be provided immediately, except in rainy conditions.

It is recommended for the plantlets to be mechanically planted so as to reduce cost and increase efficiency as well as reducing the dependency on intensive labour. The planting machine, a Ferrari F-Max four line planter manufactured in Italy under the specifications of Biothek, can plant between 6 – 8 hectares per day. The Ferrari F-Max is largely used in Europe for the establishment of large commercial Arundo Donax farms. Equilibre acquired the Ferrari F-Max planting machine in December 2016 and it arrived in the second week of February 2017.

The tractor pulled Ferrari machine, has adjustable forming wheels that allows for variable vertical position of the plant. It can plant at a maximum of one meter between row spacing and can be adjusted for intra spacing between the plants. Four operators are required at a time to be seated at the back of the machine. They are required to drop the plantlets in the rocker type carousel which ensures automatic and precise drops of the plantlets in a kicker inside a shoe. Equilibre trials have validated that an average planting rate of 160 hectares per month can be mechanically achieved using the arundo specifically modified Ferrari planting machine. 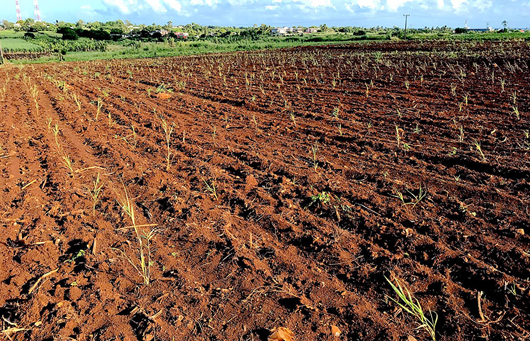 Weed Control:
Donax is slow in establishing itself after planting. Therefore weed control will only be required during the first two months after planting, that is before the canopy closes. Normally after this period weeds cannot compete with the crop. After planting of stem cuttings a pre-emergence herbicide should be applied. After harvest regrowth is rapid and therefore weeding is generally not required, except for some spot application of a herbicide if really needed.

Pest and Disease Control:
No pest or disease of economic importance is present on A. Donax that require control. Nevertheless planters are requested to report any damage if noted on their plantation.

Irrigation:
Rainfall being erratic and inadequately distributed, irrigation is important for an optimum yields of A. Donax to compensate for any water deficit during the crop cycle. Irrigation can be practiced using the dragline sprinkler or the solid-set sprinkler irrigation systems to obtain good crop establishment in first months, sufficient moisture must be available in the soil. Therefore it is very important to provide irrigation during the initial stage in case rainfall is inadequate.

How much water to apply?
Irrigation will vary from one region to another and will depend on the soil type, the prevailing agro-climatic conditions like rainfall and evaporation, the stages of crop growth and the irrigation system being used. 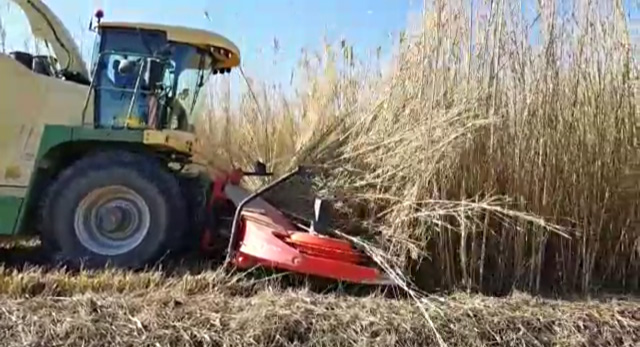 We consider the cutting stage to be a key point for the arundo crop’s viability. From tests carried out in real-life conditions, we can say that we have selected highly efficient techniques for the harvesting of the crop. The methodology and technology proposed will be validated in accordance to a wide range of conditions and environments.

The technology suitable for the work would be based on a fully mechanized type cut associated with an industrial conditioning system. The entire system is proposed so that it functions as one self-driven unit , thus avoiding passes, costs and possible damage. This system guarantees rapid drying as we can break and crush the shoot transversally and longitudinally, thus allowing the circulation of air, without causing significant loss of product.

It is important to mention that there are environments in which the proposed model is complicated to apply, therefore we understand that each situation should be evaluated in order to structure the cutting or direct churning plans based on the technology which will receives the final biomass.

Once the cutting is complete, the drying time will be based on the weather, the drying time is not expected to exceed 10-15 working days in accordance to recently performed drying tests in the field. 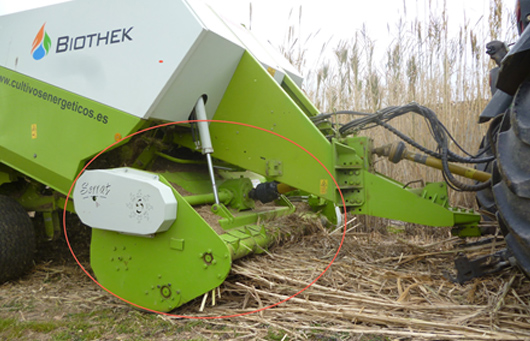 There are many techniques for carrying out the collection process, but the most recommendable from our point of view is, without doubt, in situ densification, which consists of chipping the product with a previously modified common crop packer.

In situ packing: The technology consists of adapting a piece of packing equipment and a piece of chipping equipment, thus managing to minimize costs and simplify the entire transport process. Currently the machinery has been developed jointly by Equilibre technical partners BIOTHEK and SERRAT Trituradoras, first manufactured in Spain in 2012.

The general intention is to pack the crop directly, with the adapted picker in the pick up system. With this system we can ensure that the product is suitably chipped and densified with one unique pass. It is necessary to mention the tying system, as only packers with a double knot system are valid. The most recommendable format is 90×120cm and 2.40 cm long and 500kg in weight. The packets produced would contain chips of less than 9cm. Around 320 hp and moulded wheels to avoid punctures are needed in order to tow this machine.

The packets produced will be collected mechanically and preferably with an auto-loading car. A more traditional one, such as a tractor’s hydraulic loader, can replace this collection system. It is important that the storage piles are prepared so that it is possible to ventilate the packets, thus notably reducing the existing humidity.